“Sustainable shipping for a sustainable planet” is the World Maritime theme for 2020. This will provide an opportunity to raise awareness of the United Nations’ Sustainable Development Goals (SDGs), and showcase the work that the International Maritime Organization (IMO) and its Member States are undertaking to achieve the targets.

​The theme for this year is “Sustainable shipping for a sustainable planet,” which provides an excellent opportunity to raise awareness of the United Nations’ Sustainable Development Goals (SDGs) and to showcase the work that the International Maritime Organization (IMO) and its Member States are undertaking to achieve the targets. The theme will provide opportunities for leaders from various sectors, including shipping, to both reflect on the work done and the urgent steps they further plan towards a sustainable future.
The shipping industry, with the support of the IMO regulatory framework, has already started the transition towards this sustainable future. IMO has  adopted and will continue to develop measures to cut greenhouse gas emissions, reduce the sulphur content of ships’ fuel oil, implement the Ballast Water Management Convention, protect the polar regions, reduce marine litter, improve the efficiency of shipping through the electronic exchange of information, meet the challenges of the digitalization of shipping and enhance the participation of women in the maritime community.

The COVID-19 pandemic has highlighted the professionalism and sacrifice of the two million seafarers who serve on the world’s merchant fleet. Shipping has continued to transport more than 80% of world trade, including vital medical supplies, food and other basic goods that are critical for the COVID-19 response and recovery – but hundreds of thousands of seafarers face a humanitarian crisis as they have been stranded at sea, unable to get off the ships they operate with contracts extended by many months. This needs to be addressed urgently, through Governments designating seafarers as essential workers and ensuring safe crew changes can take place.

This year’s World Maritime Day will be celebrated on 25 September 2020 in the form of an online event, due to social distancing measures caused by the pandemic.” Download the flyer here or by clicking on the image below.

INTRODUCTION
1. A National awarness workshop on the implementation of the International Maritime Dangerous Goods (IMDG) Code and the International Maritime Solid Bulk Cargoes (IMSBC) Code will be held in Yangon, Myanmar, 12 to 16 November 2019.
2. The activity is organized within the framework of the Under IMO’s Integrated Technical Cooperation Programme (ITCP) and in collaboration with the Department of Marine Administration of Myanmar.
3. This capacity building programme aims at providing training to shore-side personnel involved in the management of dangerous goods in packaged form and solid bulk cargoes in all their various aspects (e.g. correct identification, classification, packing, labelling, handling, storage, loading, stowage, unloading and transport), which will enable them to improve their understanding of the IMDG and IMSBC Codes as well as enhance implementation and good practice when dealing with these mandatory international instruments. 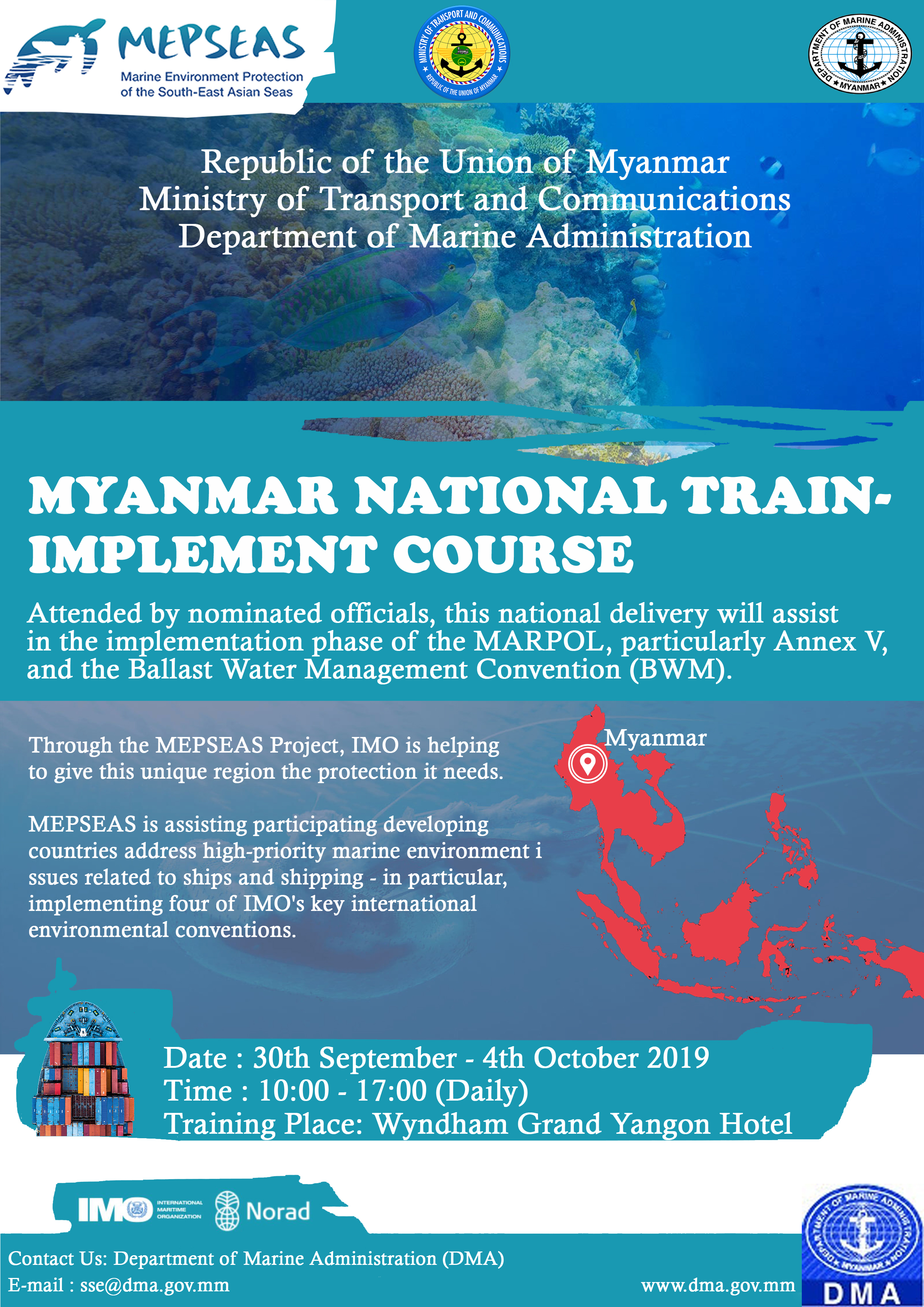 The four-year project, titled ‘Marine Environment Protection for Southeast Asia Seas (MEPSEAS)’, will focus on enhancing the countries’ capacity to implement a number of high-priority marine environment conventions, including the International Convention for the Prevention of Pollution from Ships (MARPOL); the Anti-Fouling Systems Convention; the London dumping of wastes convention and protocol; and the Ballast Water Management Convention.

Under the agreement, Norad will make available some USD2 million via contributions to IMO’s Integrated Technical Cooperation Programme. The seven ASEAN countries involved will be Cambodia, Indonesia, Malaysia, Myanmar, Philippines, Thailand and Vietnam.

The project will build on a previous IMO-Norad project which directly led to the six countries (except Myanmar) concerned making substantial progress in terms of implementation and/or ratification of IMO environmental treaties. For countries which have acceded to the relevant treaties, the new MEPSEAS project will allow them to focus on effective implementation.

MEPSEAS is engaging regional, national and local partners, representing government, industry and NGOs. Greater participation by women is also being targeted – through partnering with the IMO programme on Integration of Women in Maritime Sector.

South-East Asia is dominated by the sea. With extensive coastlines and about 30% of the world’s sea space under their jurisdictions, the countries of the ASEAN region have a vital influence on the health of the oceans.

The region’s coastal and marine ecosystems are among the world’s richest and most productive, with vast social and economic importance. Yet the pressure from increased shipping activity is immense – and growing.

Myanmar has a large marine territory of important coastal and marine ecosystems. It includes the Myeik Archipelago, which is made up of hundreds of islands.

Maritime transportation serves more than 80% of the nation’s trade and the country has developed a pool of seafarers that are deployed on board ships engaged in international voyages across the world.

The fisheries sector is the second largest food producing sector – a major source of food and employment. The seafood sector alone directly employs 3-4 million people and focuses primarily on the export market.

Myanmar will participate in this project to implement MARPOL Convention that has been ratified and to ratify Ballast Water Management (BWM) Convention/Anti-Fouling Systems (AFS) Convention.

To build capacity to implement national-level legislation and strategies.

To “conserve and sustainably use the oceans, seas and marine resources for sustainable development” is a key target of the UN Sustainable Development Goals (SDG 14). MEPSEAS draws on the capacity and expertise already developed in the foundation project to intensify momentum towards this vital objective.

The four-year project- Myanmar will work to enhance the countries’ capacity to implement high-priority marine environment conventions, including the Ballast Water Management Convention, the International Convention for the Prevention of Pollution from Ships, and the Anti-Fouling Systems Convention.

Attended by nominated officials, this national delivery will assist in the implementation phase of the MARPOL, particularly Annex V, and the Ballast Water Management Convention (BWM).

​​The World Maritime Day theme for the year is “Empowering Women in the Maritime Community”.
This provides an opportunity to raise awareness of the importance of gender equality, in line with the United Nations’ Sustainable Development Goals, and to highlight the important – yet under-utilized – contribution of women within the maritime sector.
The theme gives IMO the opportunity to work with various maritime stakeholders towards achieving the SDGs, particularly SDG 5, to foster an environment in which women are identified and selected for career development opportunities in maritime administrations, ports and maritime training institutes and to encourage more conversation for gender equality in the maritime space.

Empowering women fuels thriving economies across the world, spurs growth and development, and benefits everyone working in the global maritime community in the drive towards safe, secure, clean and sustainable shipping.

Achieving gender equality and empowering all women and girls

Shipping has historically been a male-dominated industry and that tradition runs long and deep. However, IMO believes that empowering women fuels thriving economies, spurs productivity and growth, and benefits every stakeholder in the global maritime community. Through its Women in Maritime gender equality and capacity-building programme IMO encourages its Member States to enable women to train alongside men in their maritime institutes and so acquire the high-level of competence that the maritime industry demands.

IMO supports gender equality and the empowerment of women through gender specific fellowships; by facilitating access to high-level technical training for women in the maritime sector in developing countries; and creating the environment in which women are identified and selected for career development opportunities in maritime administrations, ports and maritime training institutes.

The World Maritime Day Event 2019 will be held in Yangon, Myanmar, on 30 September 2019, at Wyndham Grand Yangon Hotel. Event will start from 9 AM.

Ministry of Transport and Communications